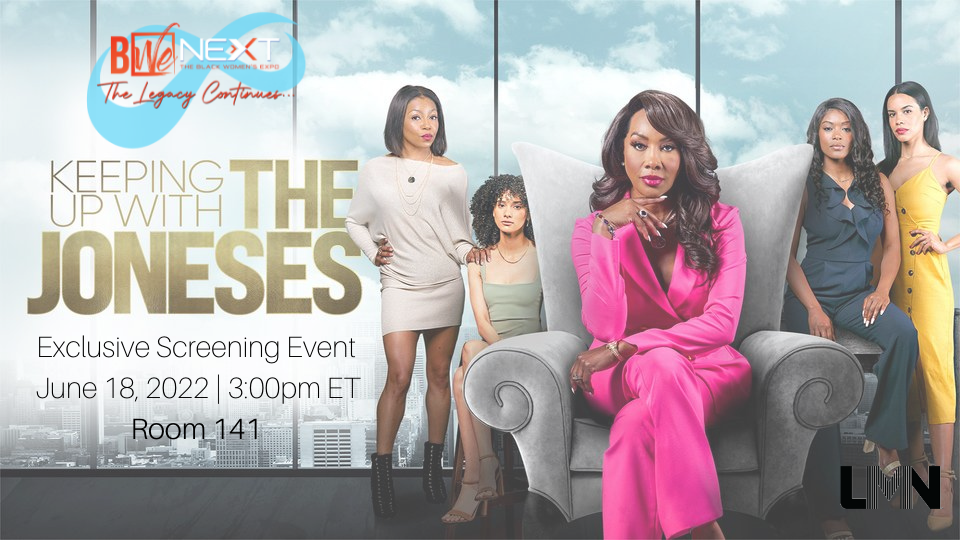 Lifetime Movie Network Presents an exclusive screening of “Keeping Up With the Joneses” at The Black Women’s Expo, starring and executive produced by Vivica A. Fox. Light refreshments will be provided!

**NOTE! THIS SCREENING IS FOR TICKETED GUESTS OF BWE NEXT (THE BLACK WOMEN’S EXPO) ONLY! YOU MUST SHOW YOUR TICKET AT THE DOOR FOR ENTRY. TO PURCHASE A TICKET, CLICK HERE: https://www.ticketfalcon.com/e/bwenextdetroit/**

About the “Keeping Up With the Joneses” Movie Series

The four all new films are produced by Hybrid and executive produced by and stars Vivica A. Fox as the matriarch of a wealthy family, who along with her four stepdaughters, will stop at nothing to protect their business and family after they are threatened.  The four-part movie series event is narrated by Kandi Burruss (The Chi, The Real Housewives of Atlanta) and also stars Ted McGinley, Eric Roberts, Arie Thompson, Ciarra Carter, Jasmine Aivaliotis, Marcos James and Shellie Sterling.

Each two-hour movie follows the well-to-do Jones family who for generations have dominated life in and around the seaside town of Pacific Hills. After the death of patriarch Theodore Jones, his second wife Robin (Vivica A. Fox, The Wrong Valentine), assumed control of the family business, but now Theodore’s daughters, Robin’s step children, are coming into their own. There’s cold and calculating CEO, Pam (Arie Thompson, Once Upon A Lifetime); Carrie (Ciarra Carter, Secret Obsession), the family’s conscience who oversees its charitable endeavors; party-girl Kayla (Shellie Sterling, Snowfall) and Tara (Jasmine Aivaliotis, The Wrong Prince Charming) who, though still in high school, might be the most Machiavellian of all. When the Jones family faces adversity, and when their backs are against the wall, there’s nothing they won’t do to hold onto their power… because when you mess with them, you are messing with the Wrong family.

BWe NEXT (The Black Women’s Expo) is the nation’s longest running exposition for the African American consumer.

BWe NEXT (The Black Women’s Expo) is the nation’s longest running exposition for the African American consumer.